What happened to the ad era and why it matters to you.

The CMO position is the revolving door of C-level positions, with the highest turnover rate of all C-level positions.1  Some say misaligned expectations from the CEO and lack of empowerment are to blame. Maybe so. We think the primary issue is the “big bang change” in the CMO role.  The expectations have catapulted to the degree that the position is not set up to succeed with one person.

The solution? A hybrid model that solves the equation: expectations, empowerment and change. Use your CMO to manage close-to-the-vest customer-oriented functions. This makes the CMO more strategic, giving them better job satisfaction and positioning them as a game changer in the CEO’s eyes.

Marketing consultants are required to navigate change or their businesses fail. Instead of trying to keep up with change at the cost of expensive mistakes or research churn, the marketing partner(s) takes on fueling the engine.

The Big Bang Theory says the universe as we know it started with a small singularity, then inflated over the next 13.8 billion years to the cosmos that we know today.2  Sounds like the pace of the ever-changing CMO. Learn how can we help.

Get The Marketing Big Bang Poster

View the Concept to Contract Marketing Bing Bang Poster below online or Click here to download the full color poster. It’s 80 inches wide! Let people know they can get it here too. The timeline poster shows technology and marketing milestones, the expansion of marketing tasks and tools, and sales techniques over the decades. A veritable compendium of what made us marketers the brainiacs of our time. 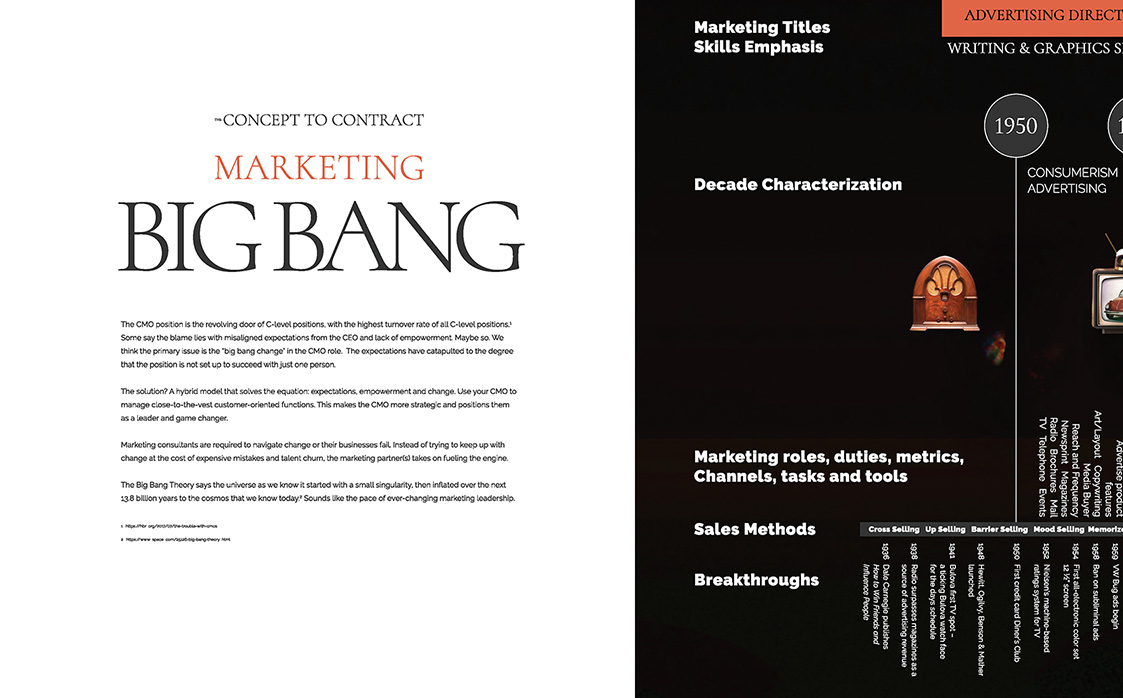 Too many times, Marketing is accountable to filling the sales funnel with a multi-channel approach. We’ve seen dashboards that proudly display the number of leads by stage. Leads are great, but if they aren’t closing, it’s hard to justify the marketing spend.

In recent years as the CMO has gained power, their budgets are increasing. That is, where they can tie leads to opportunities that generate revenue. While measuring the source of leads (i.e. marketing-originated leads) is a metric to track, it is far more valuable to understand how Marketing and Sales collaborate to bag the deal.

Looking at the traditional marketing funnel, some questions to ask as you approach “marketing with a quota mindset,” are: 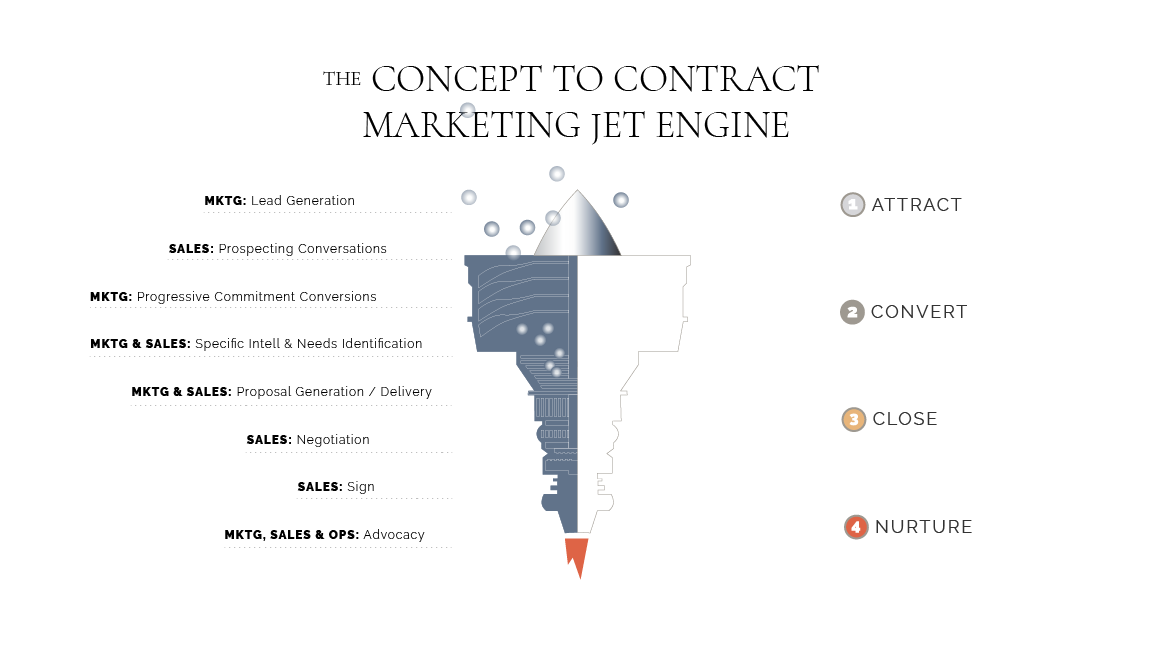 Companies with flat or declining spend in marketing tend to focus on marketing activities, such as a flashy website, memorable events and lots of social media followers. While those are a necessity, they don’t close a deal. Take a look at the Concept to Contract Marketing Jet Engine. It’s less about filtering out ‘bad leads’ and compressing online researchers into hot leads to generate thrust.  Process and collaboration are key ingredients to marketing with an ROI. You have to answer the question for yourself … do you want to be a cost center or profit center?

We’d love to explain with a complimentary 20-minute consultation and howdy. 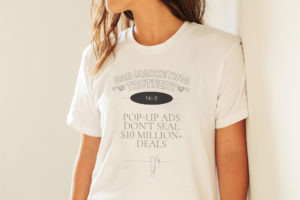 B2B customers are people. Talk to the heart. Hearts take action, not entities.

Yes, prices need to be right, solutions and performance too. But so often companies forget that decisions are emotional. In an article published by B2B International they assert that emotions account for 50 percent of buying decisions. The author, Paul Hague, reminds us that popular saying, “nobody got fired for buying IBM.”

We tend to agree because, at the end of the day, your perfect price may not matter if your reputation is tarnished or your customer service is rude … or too difficult to navigate through a series of automated responses.

In the case of McDonald’s, emotion played a large role in a $219 million outsourcing engagement. McDonalds CTO described their decision approach, citing that they displayed all the bids on a table and took turns viewing the documents.

The winning bidder, ACS, had conducted extensive research on the company, its values, its vision and the direction of the company. CtoC’s principals, alongside some of its former colleagues, “wowed” McDonald’s with its submission, even landing it in The Wall Street Journal. The article stated, “ACS beat out IBM and EDS for that contract, for which ACS packaged its pitch in a cardboard container resembling a giant Happy Meal.”

The CTO said their team’s reaction was unanimous that ACS appealed to them based on the creativity, alignment of corporate values and obvious research on McDonalds’ shifts in brand at the time.

In another example, The Walt Disney Company was motivated to ink a $610 million professional services contract through a series of emotion-inducing efforts. One of the tactics included putting together an energized senior team of ACS professionals who each read The Disney Way before engaging, illustrating their knowledge of the Disney’s values, expectations of its “cast members” and how their credo of “Dream. Believe. Dare. Do.” drove the company’s success. 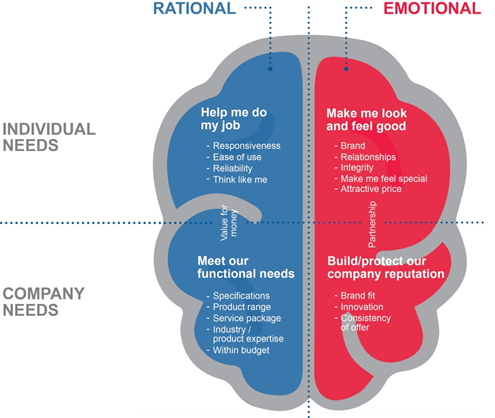 Disney’s selection team quickly appreciated ACS’ investment in understanding their unique culture. ACS adopted Disney’s theme for the project, “IT2,” and developed a formula that intertwined the company’s success factors. ACS’ senior sponsor even borrowed Disney’s language, “daring” them to “believe” in this unknown brand’s potential to be a key partner.

In both of these examples, the power of decision making in a B2B environment was based on taking to heart what matters: the emotional appeal of talking to the heart.

We could have a heart-to-heart talk if you just gave us a call at 469.626.8232, or email us and we’ll call you back  info@concepttocontract.com.

*  Do Emotions Play a Part in Business-to-Business Decision Making?